Doug has a draw knife in his antique tool collection that was made by Greenlee in Rockford, Illinois. It is stamped Greenlee in the center with the words "Rockford" above and the words "Ill. U.S.A" on the bottom. It has wooden handles and the blade wraps around the tops of the handles. He found it at a garage sale in Corning, California. He always has an eye open for draw knives because they are a unique tool and now has twelve in his collection after buying them for a number of years.

Draw knives were a very popular tool during the latter part of the 19th century. It was a common tool found in any carpenter's tool chest and was used to reshape logs or timber for building houses or barns. Since he is in the planning stages of building a log home, Doug has further developed an interest in the draw knife as a tool.

To find a quality draw knife manufactured today, one would have to pay between 75 and 100 dollars. The old draw knives you find at yard sales and flea markets can be found for between 10 and 25 dollars and are made of quality steel. One of the most common uses of the draw knife is to peel a log. Usually a log peeling style draw knife has a broader and longer blade. Years ago Doug saw his Uncle Turk use a draw knife when he took down a tree and made a finished product by clearing off all of the bark on the tree and removing the cambrian layer of the bark. By doing this, his Uncle Turk told him this would stop the decaying process of the wood and the log would be preserved for many, many years. This is the same method used by many frontiersmen in constructing a log home and also contemporary carpenters in constructing a log home today. 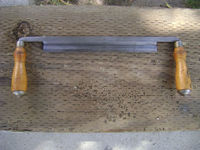 One of the most important safety tips in using a draw knife is to make sure it is always sharp. Using a two-sided wet stone, medium-fine, you can sharpen this tool to the point that it can shave your arm. This is when the tool is most effective and easy to use. If you let the blade get too dull or have a chip in it, it is much harder to pull it through the wood and control the depth of cut.

Doug has used a draw knife to prepare logs for a bannister he is planning to build on the log home. These logs were about four inches in diameter, as opposed to a twelve inch log, and it was pretty easy to work with the smaller logs, since there was less wood and bark to remove.

Doug once saw his uncle making a wooden bowl and shaping the outside of the bowl by carving it with a draw knife to remove the excess wood on the outside of the bowl. By using the draw knife, his uncle could control the amount of the wood removed and the depth of the cut with ease. The finished product was a beautiful hand made bowl that was one of a kind. He has also seen a draw knife used to reshape or to shape legs on rustic tables and chairs. The draw knife is a versatile, rugged tool that will always find a place in the tool chest of a person who works with wood.